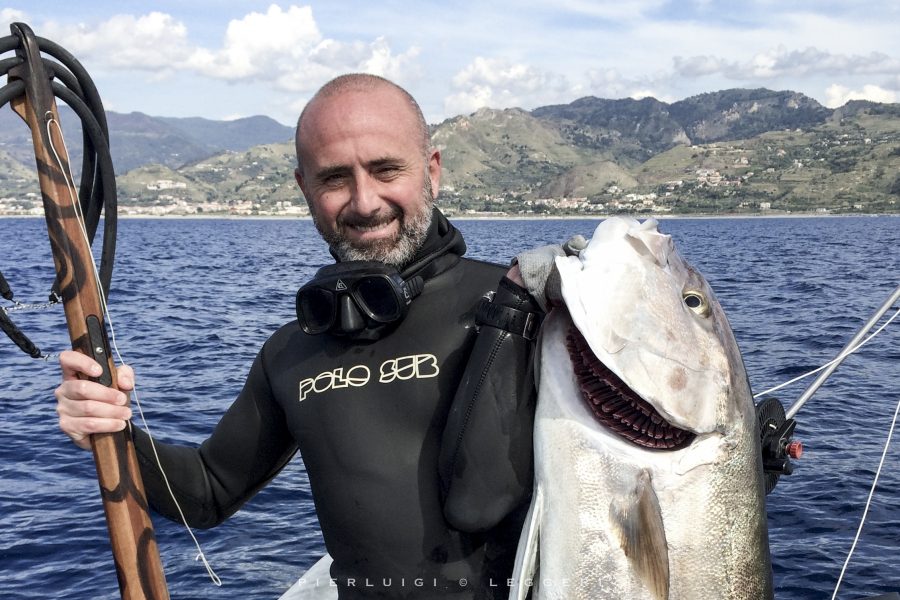 The seabeds of this part of the Tyrrhenian Sea has been exploited to the point of extinction, impoverishing a stretch of sea that offers unique spectacles. The high depths create shallows where life in all ways tries to carve a space by adhering to the rocks, digging them to cling well and not ripped off.

When I am offered a fishing trip here I accept because I know it will be a difficult challenge for the depths I could reach and then why am I always amazed to discover new landscapes in places that I believe incorrectly know very well.

Gianni, for days, had collected information from local fishermen, who are usually trawl fishing or use the ledger line, he was curious about their speeches on some shallows about -50 meters where they had caught some groupers. He called me two or three times a day to convince me, telling me that in that sea area somebody came down with the scuba tanks to confirm the presence of the shallows and that these were fairly extensive.

Gianni doesn’t make much effort to convince me and, as soon as I’m in the water, I forget about traffic and the city and thank him for dragging me into this adventure. I’m so glad and I don’t care if I haven’t found anything on this day. We mapped the seabed with the echo sounder starting from a batymetric of -80 meters finding the shallows about a couple of miles from the coast. In this area the water is clear because the seabed is deep and away from the sea storms: ideal conditions for diving. But in the first exploratory dives between -40 and -50 meters I realize how much current there is in depth.This phenomenon will complicate my situation on the seabed where I’ll have to remain motionless.
I meet some lonely snapper, some golden grouper, but where are the big groupers, of which the fishermen were talking about? I get a rage. We are out of season, far from large inhabited centers, at these depths and there is no fish!

It is not the day to be, itself, the unfortunate one! We will return here a few times but the story will always be the same… 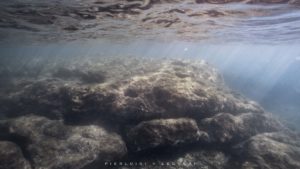 On the third day we find a nice rise, right on the south side of the shallow. Here the seabed rises to -50 to 52 meters but it forms beautiful valleys up to -60. It will be, at least, a nice workout.
I dive … on the surface the water is clean but, as soon as I reach -30 meters deep, I get into a cloudy blanket. Suddenly the visibility is reduced to a few meters… I’m sorry because the point is very beautiful.
While I’m sitting on the seabed, keeping in mind the account of the seconds I’ll use to rise again the surface, I know an interesting fish movement alongside me…
Here it is! A large amberjack appears, it’s majestic and it’s hunting!
As you approach a few meters from me, it snaps nervous and scared even though I have not moved… It’s gone!… but I’m left with the thrill of a great sight.
Yet I feel it, today it is the queen of this place, it is the predator par excellence and it is here around to prove it; I’m sure … it will be a tough challenge.
I rise up to the surface to prepare for another dive. It will be the only opportunity to take it: if I fail, it will not come back.

I’m going. During the downhill something exciting happens: I meet it halfway down my descent to the seabed, I fixed its eyes and it does the same with mine during my descent… the duel is began.

I rest as still as possible, it is nervous, only a movement and it could flee away forever. I have to keep calm. 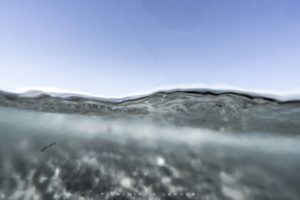 I miss a few meters to get to the bottom, now I can’t go wrong: as soon as I get down I’ll have to stand still and wait for it. I’m at -54 meters…

It comes in front, it’s still a bit distant, I’m watching it … shoot, take it!

I start to go back to the surface, but slower than I had expected: I hit it, but unfortunately in the lower part: the risk is that it can escape. It would really be a shame and that’s why I proceed slowly, and in the meantime I feel that the air is getting scarce.

In these cases it is good not to force your hand: you must let the line slide from the reel as much as possible, keeping the fish tense but without forcing.  If the fish has been grasped well, in a robust part, it’s better to force and not allow it to move too far. This is to prevent the fish from being caught in an obstacle while it is collected.

In these cases, however, it is advisable to risk that it goes far, forcing it would mean losing it. And I have over 100 m of reinforced line in the reel and I’m not alone.

As soon as I rise again to the surface, the team play begins. Although the fish is invisible, by the depth, I feel it pulls strong. Gianni is ready and he dives. We are really risking losing an 30 kg amberjack . These are interminable seconds also because I’m exhausted and lack of strength makes me loose concentration. But I hear the shot of the speargun and I know that the fight is over, as I know I would not have done it alone.

It is an adult and therefore solitary exemplar, a witness to the goodness of our sea which is a treasure to be respected. I’m a fisherman and I don’t do useless rhetoric, but, in my opinion, you should live the sea and not use it, you should rediscover it and not abandon to itself.

Spearfishing at large depths is an EXTREME SPORT. The risks associated with this practice can also be FATAL to athletes of long-term experience if a STRICT DISCIPLINE is not followed: always in the water with the COMPANION, great psycho-physical PREPARATION, SAFETY equipment and boat support, appropriate RECOVERY times, THOROUGH KNOWLEDGE of the apnea discipline and its limits, are essential elements to lessen the RISK OF DEATH!

A microcosm to -58 meters 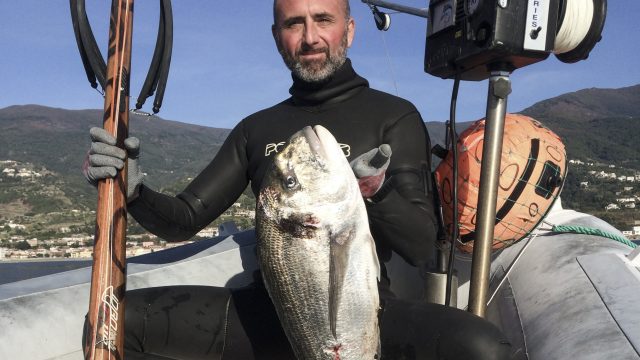 La Digue: A Wild Paradise in the Indian Ocean